For the past 5 years in New Mexico (and for 9 years earlier in Michigan) we've been providing free-and-local spay/neuter for cats through a simple voucher program.   The specifics have evolved over time but it currently works like this:   If you live in our service area, have a household gross income under $40,000 and have an intact pet cat, you can complete a phone application and -- if we approve it -- we’ll mail you a voucher that pays the complete cost to spay or neuter the cat and get a rabies shot at any of the veterinary or spay/neuter clinics we work with.

This works remarkably well for the cats that qualify – but like most programs – it doesn't work well for all cats.  It's intended to fix only low-income family pet cats with lifelong caregivers -- and so it excludes loosely owned outdoor cats, kittens being fostered for adoption, stray cats, cats whose caregivers make more than our $40K limit, and those living outside of our service area.

Recently we've been looking for ways to increase our Foundation’s spay-neuter radar to include some of these other types of cats on a limited basis and so we've begun developing a Community Cat Spay-Neuter program.    Our goal is to reach these other groups of cats without sacrificing our well-honed voucher program by making exceptions and blurring its focus.

Last winter we worked with Santa Fe’s Felines & Friends to fix a few dozen cats from Ramah, New Mexico.  This group was both outside our service area and included a mix of both feral and pet cats.  Then a few months ago we started working with the Espanola Valley Humane Society to ensure that the cats in Rio Arriba County could be fixed at no charge to the caregiver at their spay/neuter clinic.  They are in our service area but their clinic’s open door policy to fix all cats (companion and feral) extends our reach beyond low-income pet cats.  And beginning this month cats from Espanola residents are also included.  We particularly like this partnership because they are providing Rio Arriba County with free-and-local spay/neuter across the board.  And -- in our vision -- this is necessary in all areas if we are to get on top of the cat overpopulation problem.

We'll keep our primary focus on our Low-Income Pet Cat Voucher Program – because these are the cats that when left intact most often end up at shelters – where they are often put down for lack of homes – or abandoned on the streets – where they form or join feral cat colonies and continue to reproduce.   But we look to these new community cat situations as a way to provide a more complete cat spay/neuter service to New Mexico – a state with many people wanting to take care of the cats they live with –as pets and as wildlife -- but often lacking the money to pay for their sterilization.    And we welcome inquiries from other cat nonprofits who may want to join with us in this community effort.  We know realistically there will always be intact cats outside of our reach --- but by adding a community aspect to our spay/neuter package we’ll minimize their numbers.
Posted by Kitty Zimmer at 1:33 PM No comments:

We've lost two of our geriatric cats over the last 18 months to sudden death – Larry and Joyce.    Both were indoor-only feral cats about 16 years old and neither death came with forewarning.   Joyce’s death was so sudden that we had no chance to get her to a vet for examination – we just woke up one morning and she was gone – we assume it was a heart problem but have no clinical proof of that.

Larry on the other hand started showing signs of distress a few days before he died – he stopped eating and stayed under a bed coming out only to use a litter box.  We knew he was in trouble and took him to the vet for treatment.  And -- since Larry had had a complete physical exam last December -- we went into the appointment knowing that 5 months ago he was in good health for a geriatric cat – no indication of kidney disease, hyperthyroidism or cancer – at least none that were picked up by the exam or lab work.

But by the time Larry reached the clinic he had gone from being an ostensibly healthy cat two days earlier to a terminally ill cat with all his vital signs shutting down – the change was dramatic and alarming.  An x-ray pointed to the culprit – congestive heart failure brought on by cardiomyopathy.  As sad as it sounds, Larry’s unannounced and quick death is not uncommon with this disease – and it is often genetically-based so the average age of death from cardiomyopathy is a young 7 years old – and most of the victims are males.  In its advanced stage, the prognosis is very bad – even with treatment which is more of a “Hail Mary” than a sure thing.    Blood clots often result in the hind legs causing extreme pain and paralysis.

The advance symptoms are minimal if any.  If your cat goes in for annual physical exams and your vet detects a heart murmur that could point to cardiomyopathy which can be confirmed only through further testing by a cardiologist.  But – not all cats with cardiomyopathy have heart murmurs so even with an annual exam it can go undetected until the end stage when the naturally stoic cat can no longer hide the signs of distress.

Simply put, hypertrophic cardiomyopathy (HCM) is a disease of the heart muscle that eventually prevents the heart from pumping properly causing fluid buildup ending in congestive heart failure.    Although the condition develops over time, there are few early signs and since cats are masters at hiding illness it’s hard to pick up on until it’s too late.  To learn more about feline cardiomyopathy visit our web site.
Posted by Kitty Zimmer at 9:20 AM No comments: 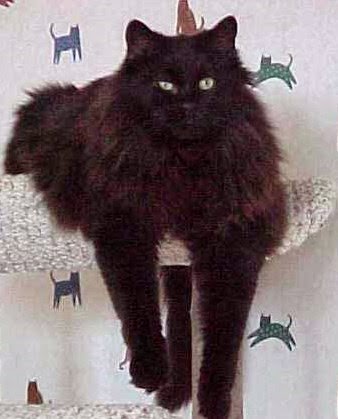 Over the last four years, May has become known as “Adopt a Black Pet Month” at shelters participating in Best Friends’ No More Homeless Pets initiative.    They’re spotlighting them – and even adopting them at reduced fees – because historically they are one of the hardest categories to place.  For black dogs this is somewhat understandable as many that end up at shelters are big and unwieldy –requiring special homes to work with them – and typically are not good choices for apartment living.  For cats the challenge is overcoming the many dark myths attached to them –tying them to bad luck, satanic rituals and witchcraft.  The strength of these myths is so strong that there are shelters who will not adopt out black cats around Halloween to protect them from cult activities and mischief tied into the holiday.

We've gotten to know several black cats through our Foundation’s early focus on Older Cat rescue and our creation of a show-and-tell colony of feral barn cats (2001-2005) at the sanctuary where the older cats lived.   To a T – they were among the gentlest and warmest cats we took in.  Some of them were lucky enough to find permanent homes with loving caregivers – Gus and Molly, Whiskers and Sparkle, and Blackjack.  Others lived out their lives with us after we shifted the Foundation’s focus exclusively to cat spay/neuter.     Of these, Robin passed away last year and – sadly – Larry died last week.

Larry’s death was particularly sad because it was sudden – for a 17 year-old feral cat he lived a pretty cushy life and showed none of the chronic illnesses cats his age usually develop – kidney disease, hyperthyroidism, cancer and diabetes.  He began life as a feral cat living outside an apartment complex in Ann Arbor, Michigan.  Then was live-trapped and brought indoors to socialize when he was about 6 months old – four months too late as the cat’s personality is formed at two months.  This closed the traditional adoption door on him and he was moved to a large feral cat sanctuary near East Lansing where he wasn’t doing well.  We picked him up from there when he was two years old and he became one of our Foundation’s barn cats illustrating to our volunteers and visitors how being an outdoor cat wasn’t a “death sentence”.  Then when he was about 7 years old he transitioned to being an indoor-only house cat.    Although he stayed feral up to the end – on his own terms he enjoyed human companionship and the perks of an indoor cat – 3 squares a day, soft beds and protection from rain and snow.    And his untimely death saved him from the chronic illnesses that -- although easily treatable in companion cats -- would have been difficult to handle with a feral cat who couldn't be handled or given medications.

If you're looking for a pet cat this year be color blind -- don't turn a cat away because you heard a scary story at camp about black cats -- as Larry shows -- black cats are every bit as worthy of our care and love as any other cat -- and if you adopt one they will not disappoint.  Black is beautiful!
Posted by Kitty Zimmer at 2:05 PM 1 comment: With warm weather on its way, your indoor-only pet cat is more at risk of getting out– doors open and close more often as you enjoy the outdoors –  and if your cat is curious –  he or she may try to bolt when they see the opportunity.  This does not mean they are trying to run away – or would prefer living outdoors – it simply means they are curious.  They are more comfortable indoors as their territorial nature defines wherever they routinely live as their home – and anywhere they don’t live – as a foreign territory.

So what happens when cats run outdoors unexpectedly?  Most often they  realize they are no longer safe in their home and get scared – and then hide under the closest bush or porch or in an outbuilding or garage.   They don't keep running as dogs would.  If you see them get out and go after them – they will run away from you and end up further from your home but still be looking for a place to hide.    And – you can be pretty certain they’ll use their hiding spot as their new “home base” – coming out only in the dark when they are hungry and need food or to gradually work their way back to their home without being seen by potential predators.    Even if you call them and they know your voice they won't come out.

To find your cat start looking as soon as possible remembering the cat is almost certainly very close at hand.

Alerting  your neighbors (within a 3-4 house radius) and asking their children to help find the cat are good strategies.  Kids know the neighborhood better than most adults.  And posting a “Lost Cat” flyer  (with a photo if possible) in your immediate neighborhood, at the local pet stores, veterinary offices and animal shelters is also useful.

Most importantly -- don't give up -- it can take weeks or months to recover your cat and at least that long for them to turn up at a shelter as a "lost cat".    To learn more about lost cat behavior visit our web site.

Posted by Kitty Zimmer at 12:53 PM No comments: