For The Elderly, There's More Than One Way To Love A Cat 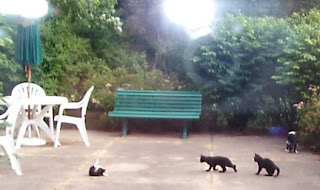 When we think of cats and the elderly, we think of Fluffy sleeping in Grandma’s bed or nestled in her lap while she watches TV. These friendships are well -documented and have demonstrated over and again the important role pets can play in helping seniors stay independent and mentally alert. Yet many elderly adults also share a very deep bond with the “heirloom” cats that pop up in their yard, and they comprise a significant demographic of outdoor cat caregivers. It’s easy to understand why Grandma bonds to Fluffy – she’s a 24/7 companion that’s warm, soft and purrs gently – but why would Grandma (or Grandpa) equally bond to shy, skittish cats that only come out between dawn and dusk and often run when they’re approached? I have a theory.

Although the elderly benefit greatly from having a pet, many are reluctant to keep one – fearing they’ll outlive the cat and won’t be there to provide life care. So they deprive themselves of the joy of caring for a cat. But -- when one or more “heirloom” cats appear in their yard -- their heart beats faster as they open the door – usually with a saucer of milk or some food to offer the new visitor. Often outdoor cats won’t eat the first time food is out, but they’ll most definitely show about the same time the next day and be more willing to accept the food then – especially if Grandma stands back or goes indoors to observe them. Once they accept the food the bonding begins, and both the cat and Grandma look forward to their daily scheduled eating sessions. Now, Grandma can enjoy the companionship of a cat without taking responsibility for the cat’s life. As time passes, the bond increases to the same level of an indoor pet and oftentimes the cats move indoors or at least enjoy house privileges on cold or rainy days.

Similarly, most senior living complexes have a resident cat colony doing mouse patrol around their dumpsters. Since many of these communities prohibit pets, these outdoor cats give the residents a way to enjoy cats in spite of the regulations. The photo above was taken at a local senior apartment complex who used our TNR program in 2007 to sterilize their colony. The cats in the photo joined their colony this summer and are the first newcomers since 2007.

The management there understands that it’s best to sterilize the cats and let the residents feed them rather than trapping them to take to an animal control shelter for euthanasia. The known colony provides hours of enjoyment for the residents and – through sterilization –no longer engages in the behaviors that create a nuisance for the management – spraying, fighting and kittening.

The newcomers were promptly sterilized and returned to the grounds. When the manager sent us the photo she noted: “Finally we were able to get a photo of our 3 new kittens with Mom in the background. They were all boys! They seem very happy and healthy and our tenants enjoy watching them play on the patio. “What could be better than that for both the residents and the cats?
Posted by Kitty Zimmer at 7:29 AM No comments: 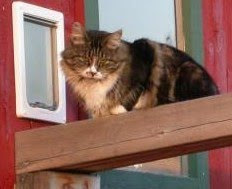 Serendipity has played a large part in my life journey and once again it’s taking charge. A month ago I was firmly ensconced in a comfortable life style – caring for our retirement cats and managing our Michigan-focused cat programs. Taking one day at a time, my only real goal was to help as many caregivers as possible get their cats fixed. Knowing all too well that the primary reason a cat loses his or her home stems from the challenges of living with an intact adult cat – especially when new kittens are free and the cost to fix a cat is out of reach of a lot of many family budgets.

Then, as we approach our 13,000th free cat sterilization, a lunchtime conversation opened up the possibility of moving to a new home. The logical choice would have been to house shop in Ann Arbor, but with the Internet making it just as easy to look anywhere – I opened Pandora’s Box only to find the house of my dreams. It’s incredible and even more cat-friendly than our current home. Only problem is that it’s 1500 miles away.

As much as I’m looking forward to settling in my new home --it’s bittersweet -- as it forces the end of our spay/neuter work in greater Washtenaw County. The Feral Colony Assistance Program has already closed to new applicants and the Lower-Income Spay/Neuter program – for both indoor and outdoor cats – will accept applications only until September 30th. All outstanding vouchers will be honored and no new vouchers will be issued to expire after October 31st.

We will miss working with the many vet clinics that have contributed their services at discount rates and all the caregivers who have shared our recognition of the importance of fixing cats and making lifetime commitments to their care. Once we’re settled in our new home, we hope to set up similar cat programs to service our new community. Thank you to everyone that made our spay/neuter programs work.
Posted by Kitty Zimmer at 9:05 AM 2 comments:

The earliest reference I’ve found to working cats dates back to about 8000 BC when humans started moving away from nomadic life styles toward settlement farming in the Middle East. Wild cats started settling down with the farmers providing their hunting skills to keep down the rat and mouse population threatening their primitive grain stores and garbage dumps. Over the next 5,000 years cats expanded their work-range to include the lofty status of being worshipped as gods --most notably in Egypt but also to some extent in Greece, Rome, China and Japan. Today cats engage in a variety of assignments – from rodent control to TV acting to library and retail store hosts to therapeutic aids and everything in between. 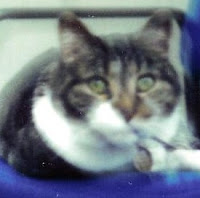 The first cat I put to work was my beloved pet Amino. She was upset about living with my other two pet cats and so I moved her to our company as our Office mascot. Since I spent most of my waking hours there she saw more of me than she would have at home – and was royally spoiled by our staff who would bring her leftovers from their dinners or share snacks off the food truck with her. She had a keen sense of who needed her attention most and when someone was having a frustrating day at work you’d find her sitting on their lap. One of our engineers had a baby who was allergic to cats and they would bring him in for brief controlled visits with Amino – I can still remember the giggles he’d let out when she notice he was there for her attention. 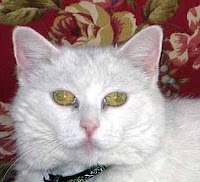 Several of our TLC retirement cats spent time in service – most notably Mama who lived for several years at a local Assisted Living home on the Alzheimer’s floor. Everyone benefitted from her care – residents who would recall stories of their former pets, staff who got well-meaning respite from her affection, and relatives and visitors who could release the inherent tension of visiting a diminished friend or relative by simply petting Mama’s coat.

Earlier in the TLC program, Picasso performed a very special hospice stay with an Ann Arbor man who was on breathing equipment. Because Picasso was old and blind and hard of hearing he could provide extended lap time– where younger healthier cats were scared away by the noise of his supportive life equipment.


A few months ago I enjoyed reading the best-selling book by Vicki Myron -- Dewey The Small Town Library Cat Who Touched The World. The author provides great detail on the variety of services he provided to the town residents. He enjoyed international fame with people coming from as far away as Japan to see him in his workplace.

As you enjoy this holiday remember to include the cats you see – outdoors mousing – greeting customers in specialty retail stores – and doing lap-sitting time with the elderly – in the workers you remember. They are an important – albeit unnoticed – group of willing workers that enhance our lives with their beauty, affection – and yes – work duties as well. All they need to do their jobs is a kindly human to feed them and pat them on the back.

Happy Labor Day to you and your cats.
Posted by Kitty Zimmer at 9:12 AM No comments: