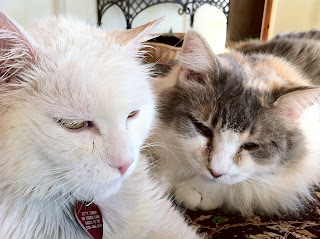 Whenever we lose one of our TLC Older Cats – as we did Mama Cat a few weeks ago – we inevitably are asked if the surviving cats go into mourning.   Since none of them speak English, there’s no way to ask them so we look to their body language for clues.    And so far – with about 13 deaths over the last 6 years – we haven’t seen any hard signs of mourning from any remaining cat after any death -- at least not in the human sense of mourning.
Life seems to just go on for the remaining cats except for one thing that was particularly obvious when Mama died.      We know that cats are territorial – so territorial that even when living communally with free access to all areas, each cat has his or her own area(s) and/or bed(s) and with 99% certainty that's where you’ll inevitably find them.  (The area and bed may change with time of day but they are still “reserved” for a particular cat’s use.)   Mama’s areas and beds were strategically located in a hallway leading to the bedrooms – one was under a bench and the other was in a walk-in closet.    About a day after her death we started seeing different cats sleeping in her beds like they were trying them on for size.  And -- within a week – their “ownership” was transferred – the closet bed to Robin and the under-bench bed to Joyce.   Apparently they were next in line for an upgrade and claimed the vacated beds for themselves. 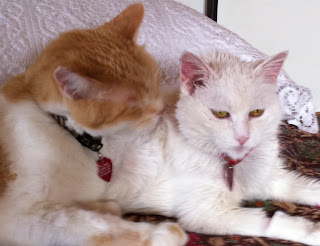 Why don’t we see more signs of mourning in our cats?   They certainly have close bonds with each other and enjoy each other’s company.  Perhaps because cats – unlike people – live solely in the present and mourning relates to dwelling on the past.  It’s not that they don’t care for each other – during Mama’s last few weeks there may have been a group sense of her graveness as she was groomed several times a day by various cats – like they were doing their best to comfort her.  But – when she made that last trip to the emergency clinic – she was literally out of their life entirely.
Perhaps in a home with a smaller number of cats there may be differences because the lives of each cat are more intertwined than in a colony setting.  For years we were told that cats were solitary animals but that simply isn’t the case.  Once they settle in, cats thoroughly enjoy the company of another cat.  So when a two-cat home loses a cat the loss may appear more severe for the surviving cat – but what appears to be grieving may actually be loneliness brought on by losing their best friend.    In these situations, the best medicine may simply be a new cat to share their home.
Posted by Kitty Zimmer at 10:00 AM 2 comments:

Mama Cat Dies on the Fourth of July 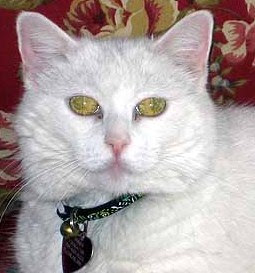 We said goodbye to yet another TLC Older Cat this week – this time it was 18-year old Mama on the 4th of July.  Her passing took us by surprise – not because we hadn’t anticipated her dying -- but because of how she died.
Mama had been an out-of-control diabetic for the last year, so we’ve been holding our breath as to when she would become ketonic and die.   We tried two different insulins with a myriad of different doses to regulate her blood sugar, but regardless of whether   we gave her more or less insulin her readings stayed erratic – ranging from 30 to over 600 – with the normal range being 50-130.   We even tried giving her Glipizide last December as an alternative to insulin but that quickly sent her to the hospital with elevated liver values and ketones in her urine.   Once she stabilized, we brought her home, and began a steady low dose of PZI insulin twice daily.  Recognizing the futility of trying to regulate her glucose levels, we simply monitored her weight and appetite to make sure she was feeling okay.


Then a week ago she started having seizure-like events.  The first two were very mild involving slight tremors, but the last two were more severe -- where she would get dilated pupils and have trouble standing afterward.  Because she was diabetic we thought they related to hypoglycemia but when we’d check her glucose level it ranged from 350-450.  Her veterinarian ran some tests and advised us the problem was serious but not diabetes-related.

She must have had a long-standing undiagnosed heart condition that slowly enlarged her heart and weakened its right side so she couldn't effectively pump blood to her brain.  Her seizures were actually fainting spells.  We stabilized Mama with oxygen and diuretics and she came home for hospice.  She did okay for a few days and then had another fainting spell.  We took her immediately to the emergency clinic but she didn’t survive the 15-minute car ride and was pronounced dead on arrival.
Mama  started life as a family pet but at age 7 was relinquished to an animal control shelter – as often happens families with young kids find themselves over their head and try to simplify their life by eliminating family pets.  The shelter transferred her to our Older Cats for Older People program and from 2000-2005 she lived as a service cat at an assisted living residence in Ann Arbor, Michigan.  She lived on the Alzheimer’s floor and was loved by everyone -- staff, residents and their families.  Then in 2005 she was returned to us when her employee-caregiver resigned from the residence along with several other staff members.  She was concerned that no one would take over Mama’s care with the turmoil caused by a major employee exodus.  We’ve had Mama ever since.  She was a pleasure to be around –certainly one of the most easygoing cats I’ve ever known – and I know she'll be waiting for us on the Rainbow Bridge in a Buddha-like position with a loud, friendly purr.  RIP.
Posted by Kitty Zimmer at 10:44 AM 1 comment: