Coswell Dies After A Long Bout With Feline Lymphoma 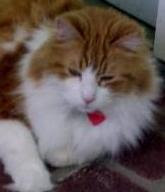 We lost Coswell last Sunday to advanced lymphoma. It started in his intestine last winter and was being well-managed on medication until about a month ago. Then the lymphoma started moving into other parts of his body – most notably into his eyes. By the time we euthanized him he had gone completely blind and was showing signs of neurological problems.

Coswell was a beautiful 15 year old cat that came into our TLC Older Cat Program in 2003 when the Ann Arbor animal control agency trapped him living at a shopping mall dumpster. He had a sweet disposition and had probably not been on the streets long when he was taken. Whether he was a lost pet or abandoned cat we’ll never know.

He had the most beautiful white whiskers of any cat I’ve seen and one of the best purr machines I’ve heard. He got along well with all the cats and was a favorite friend of Onyx. We will all miss him dearly!
Posted by Kitty Zimmer at 1:02 PM No comments: