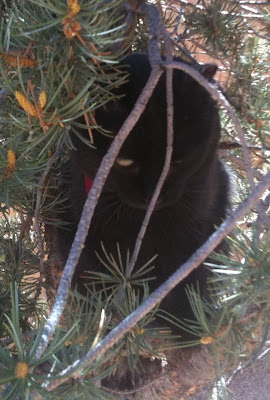 I once listened to a speaker from England explore cultural differences in cat care. For example-- in the U.S. -- shelters often refuse a cat to someone who won’t agree to keep their cats indoors -- while in the U.K. --shelters often do the opposite -- refuse to adopt to someone who won’t let their cats outdoors. Few cat care issues are as emotionally charged as this one – and even in the U.S. where animal organizations strongly discourage outdoor lifestyles -- because it puts the cat’s life at risk from cars and coyotes – there’s still many who hold a cat’s right to go outdoors is inalienable -- after all a cat is a cat. Right?

I’ve struggled with this for years with my own pets. For awhile we had cat doors to let them come and go as they pleased during the daylight but kept them indoors at night. There’s no question that our cats enjoyed this freedom – but it came with a price. We used Revolution monthly to prevent fleas and worms, and when it was wet outdoors their muddy paws soiled our floors. But the worst part was that when someone infrequently disappeared for a day or so, we’d be frantic with worry – only to learn they were fine. To add salt to our wounds – when they did return -- they’d look at us curiously wondering why we were seemed so relieved to see them again. After all – they knew they hadn’t gotten lost or injured -- they were just out catting. But the fact that we felt so guilty spoke volumes.

Over the years we’ve cut back outdoor access dramatically – they still go outside but only in a confined area – and only when we’re watching them. They no longer can run loose even in the daytime. And because cats are highly territorial I think they’re okay with this too – a territory is a territory. Once it’s defined it becomes their planet.

On our new home, we’re building a screened-in area on our patio for the cats to go outdoors without risk – and we hope it’ll be finished later this month. Originally we thought our walled-in courtyard would be safe but quickly found it works only for the geriatric companion cats whose arthritis keep them from jumping over the wall. Our indoor feral cats – Robin, Larry, Joyce, Cleo and Emmy – are a tad younger and more agile so the wall doesn't contain them. They’ll have to wait for the screened porch to sun themselves and breathe fresh air.

At least that’s what we thought until we made a rookie error a few evenings ago. It was warm outdoors so we left the sliding screen door to our courtyard unattended while we watched TV in the living room. We thought the house was secure but it wasn’t. Cleo is a classic Torti -- both smart and cunning. She saw an opportunity for adventure and took it – by cleverly pawing at the screen until it slid open just wide enough for a cat to slip out.

By the time we discovered her new skill, Cleo, Larry, Joyce and Robin had all jumped over the wall and vanished. It was dark. We were tired. And calling them didn’t bring them home. Worse -- we knew even if we saw them we couldn’t catch them because they’re feral and would run -- away from us not indoors. So we turned all the outdoor lights on and monitored the doors to see if they were near. Luckily, by 1:00 a.m. Larry, Joyce and Cleo had decided their adventure was over and it was time to come back home.

But Robin proved more difficult and we feared the worst. By morning there still was no sign of him anywhere so we spent the next day looking for him. Unlike dogs, cats don’t run – the last thing they want is to be outside of their territory – so we kept our sights on the immediate area. We knew he had a collar on with our phone number and was microchipped so if he landed at a shelter at some point we’d be notified. We also know that cats use scent as a location tool, so we cracked our garage door open about his height and stuck a pillow with his scent on it in the opening. And – lucky for us – the following morning when I opened the door to the garage there was Robin – as big as life and twice as beautiful! He found his garage – possibly through the pillow’s scent – and waited safely inside it until I opened the door to let him in.

Now the screen has a new latch on it – so even a crafty Cleo can’t slide it open – and we’re staying after our builder to get their screened-room finished asap. Keeping cats indoors or outdoors is still open for discussion – but at least for me – I sleep better when I know the cats are all safely inside when I go to sleep.
Posted by Kitty Zimmer at 9:55 AM No comments: