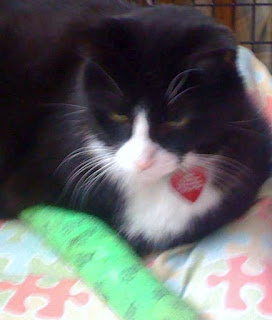 A few weeks ago a Santa Fe woman called us about Spook -- her 8-year old male cat.  He just wasn’t acting right and she wanted to get him to a vet to find out why.  But raising two grandchildren on an income of only $15,000 per year made that next to impossible.  The first clinic she called quoted $150 just to walk in the door and then more depending on what treatments he needed.  The second clinic quoted less but they couldn’t see him until the next day.  I could tell by the somberness in her voice that she felt he needed attention sooner rather than later.   She hesitated to call a third clinic because by now she knew the cost of diagnosing and treating Spook at any clinic was way outside her budget.  Then a friend of hers suggested calling us for financial assistance.

Normally we would have declined to help because our focus has been exclusively on cat sterilization.  But something about this call hit a chord.  And -- if our goal in sterilizing lower-income pet cats is to keep them in their original homes – would it be stretching it too much if we added acute medical emergencies to our program?    After all – if a cat’s guardian can’t afford to sterilize their cat, how are they going to pay for a medical emergency?  And – without prompt professional attention– the cat may suffer unnecessarily – or may even die prematurely.  Considering this we suggested Spook’s guardian take him to a third clinic and ask the vet to provide us with a diagnosis and estimate of treatment costs.  If the long-range prognosis for the cat was good, we may be able to pay the costs to treat his emergency.

Lucky for Spook she got him to a clinic that afternoon.  His urinary tract was blocked and if that had not been corrected immediately he may have died.  Fortunately after a brief hospitalization with lots of fluid therapy he was ready to go home again and pick up life where he left off – with no serious damage to his health.  Don’t you just love a happy ending?

We do.  So now we’ve formulated Spook’s situation into a new Foundation program called Acute Veterinary Care Assistance.  Services covered are the necessary costs to treat an otherwise-healthy cat for an acute and curable health problem.  It serves as a last-resort option for cat caregivers in our service area who are unable to pay for the treatments themselves and cannot qualify for traditional funding through existing financing programs such as Care Credit.

The best news is that it won’t take any funding from our free cat spay/neuter program because we’re funding it with the money we previously allocated for feline veterinary scholarships – a program we put on hold during the 2009 financial meltdown.   With our last scholarship recipient graduating this year, it was time to open the program to new applicants or reallocate the money to something else.  As much as we liked sponsoring new feline veterinarians, we believe funding acute veterinary care is more in line with our mission –channeling the money directly to otherwise healthy cats in need of emergency care.

For just as we believe that no cat should have to lose a good home because their caregiver can’t afford to get them fixed, we also believe no cat should have to suffer or die because their guardian can’t afford to pay for urgent care.    For complete program information on this and all our programs, visit our web site, Zimmer-Foundation.org.
Posted by Kitty Zimmer at 1:28 PM No comments: