“In the United States, 30 million feral cats roam the streets. Euthanizing the animals is costly and morally repugnant. Surgical sterilizations works, but it is expensive and difficult to implement. A kind of animal contraception would be welcome. And now someone is willing to pay for it. Billionaire inventor Gary Michelson has pledged $75 million to fix the feral pet problem. Most of the money is aimed at paying for research, but a big chunk will be awarded for the developer of the first solution that meets the award criteria: it has to be a onetime treatment that lasts for the animal’s life time. (See http://tiny.cc/pets352 for more information).” --Mensa Bulletin March 2010

I don’t want to rain on Mr. Michelson’s parade. I truly wish more billionaires were willing to fund pro-active cat sterilization – and would stand up and state publically that the time-worn practice of shelter euthanasia is morally repugnant. It’s been clear for a long time that pro-active sterilization of cats and dogs is not only the more humane way to lower populations, it’s also more effective. Yet the bulk of private donations and tax dollars that go into companion animal welfare is used to construct and maintain animal control shelters – vestiges of the 1950’s who typically kill as many or more cats and dogs as they adopt out with little funding left over for pro-active sterilization, so free and accessible cat and dog sterilization has never been fully tested.
So, while I wholeheartedly support Mr. Michelson’s desire to find a magic bullet to fix all cats, I wonder if he’s underestimating how difficult this will be using chemical means. No, not the invention of the drug – chemical sterilization should be well within reach scientifically. But, how do you administer it to feral cats? They are afraid of people, nocturnal, and untouchable. I suppose you could put it in their food, but how do you handle dosing? Cats eat communally and come in all different sizes – so won’t you run a risk of overdosing some, under-dosing others – and potentially missing the ones that are out roaming on the day you sterilize them? Would the same drug work for males and females? If not, how would you separate them to fix them? If you tried to dose them over more than one feeding session, how do you keep the ones already sterilized from being fixed a second time?   What if an already surgically-sterilized cat is in the group -- what's the effect of chemically repeating the process?

With tactical problems like these, you would probably have to live-trap them and anesthetize them in order to ensure accurate dosage – and you’d need to ear-tip the cats to prevent re-doing them at a later date. Since a major part of the surgical spay/neuter cost is the anesthesia –by the time you pay for the designer drug -- and to anesthetize the cats to dose and ear-tip them – you’re cost advantage may be long-gone.

And – most importantly – the reason spay/neuter is so critical is not only because it prevents more kittens but because it also alters the cat’s behaviors and personalities. This is what allows them to live indoors with people. Will the drug prevent cat spraying, fighting and yowling(as surgery does) or just kittening? If not, if a caregiver wants to take a chemically-sterilized cat home to live with them, will it be the same as living with a surgically-sterilized cat or an intact cat? Let’s hope – if and when someone wins Mr. Michelson’s prize – the criteria they use for designing it goes beyond that stated in the offer. Or, maybe the $75 million could be better spent moving us toward a community that provides free accessible spay/neuter for all cats – friendly and feral – and let the problem take care of itself.
Posted by Kitty Zimmer at 12:19 PM 2 comments:

As Of Today, Only Swiss Animals Living In Zurich Have Legal Representation 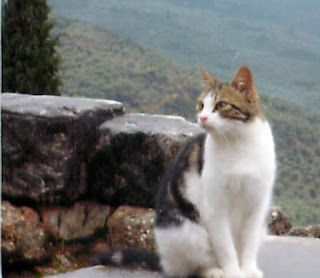 Yesterday the people of Switzerland overwhelmingly defeated a bill that wold have assigned 25 more public attorneys  to represent abused animals in court matters.    If passed, it would have extended a service presently provided by just one attorney in Zurich -- Antoine Goetschel.

And, although most of Mr. Goetschel's clients are dogs, he recently caught international attention representing a 22-pound pike who was caught in Lake Zurich and then eaten by a man who then boasted to his local paper over how the pike was caught in icy storm-swollen waters last February.    Although fishing is not considered cruelty to animals, the fact that it took over 10 minutes to bring in this pike is considered cruelty and was backed by an earlier court precedent in Germany that ruled anything over one minute is too long.   Mr. Goetschel defended his actions in representing the pike by conjecturing how people would have felt if a puppy had been dangled by a hook for 10 minutes?  And by citing that farm animals in Switzerland are protected by a strict, legally enforceable time limit between capture and death -- so why not fish?

This is one of those stories that on first reading sounds incredibly absurd.  Yet, when given more consideration sounds more rational.  I often wonder who truly does speak for animals in our culture -- and more specifically for cats?  In the U.S., cats are legally viewed as property and fall within the bailiwick of county governments through their direct animal control officers or indirectly through their contracts with humane societies and aspcas's.  Yet these agencies for the most part have their roots in animal "control" not "protection".  And -- sadly -- are the very organizations are the leading cause of death of cats -- euthanizing them with little or no accountability for their actions -- to the cats or to the community.

Perhaps there is a role for public defenders with animals rights issues -- and it's part of the logical extension of our current vision of cats and dog as "family members" not "animals" per se.    We can't have it both ways forever -- you can't think of your dog or cat as one of the family and continue to legally view them as property -- with no legal rights to life and happiness.    The vote failed yestereday in Switzerland but we can be sure -- the issue will come to  votes again both there and everywhere else -- it's just a matter of time.
Posted by Kitty Zimmer at 10:32 AM No comments: