"We just thought it best that our cat have one litter before we spayed her." 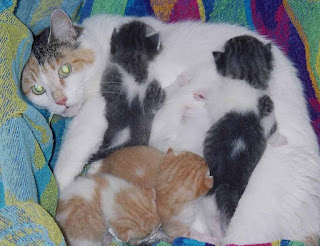 We don’t hear this every day, but we hear it often enough to make us shudder.  Someone calls to get a free spay/neuter voucher to fix their cat and proudly announces that it's time now because she just had kittens – usually coupling the announcement with “they found good homes for all her babies” or – they “will keep mom and her babies together forever” in their home because she’s “such a good mother” to them.    Apparently this makes it okay – the kittens will be cared for.

No one will argue that their hearts are in the right place.  The miracle of birth and motherhood are a sight to behold – and who can deny that baby kittens are precious?    Yet – like many of life’s temptations – allowing your cat to reproduce for your and her enjoyment – has many unintended consequences.

Just a few days ago we had a frantic call from a woman whose pet cat’s planned pregnancy went awry.  She gave birth to one kitten but several hours later was still in labor and obviously suffering.  She had no money to take her to the vet and needed financial assistance to get her help.    This meaningful experience of giving birth almost cost the cat her life.  Although many cats can and do have kittens on their own – a good number of them end up at vet clinics when they encounter problems.   You don’t know if your cat will need help until it’s too late – and the cost of emergency vet care can be staggering – with no “kitty insurance” to absorb the cost.
The concept that it’s okay to let a cat have one litter is flawed because it doesn't keep the population stable – it increases it geometrically.  Cats don't have babies they have litters -- averaging four to six kittens (not one or two) and some litters contain seven or eight kittens.    Add to that the likelihood of a mother cat getting pregnant again while nursing and the numbers go up even more.     You “may” think you can find good homes for the first litter, but the second litter -- not so much.

You may want to keep Mom with her kittens in your home but as the kittens grow into cats the commitment gets more and more difficult to keep.  The average cost of caring for a cat is about $500/year.  By the time you realize the financial commitment that was implicit in the cat commitment the kittens are much harder to adopt because they’re now adult cats.  And – if you lacked the money to get mom and the litter fixed promptly – when the kittens are 8-16 weeks old – you’ll soon find the kittens are now parents too and your problem has escalated to a crisis point.  Don’t look to shelters to take on your cats and find them homes – they simply can’t.  According to the ASPCA about 70% of -the cats given to shelters are euthanized for lack of homes.  And the no kill-shelters you think will welcome your cats?  Well they're usually full – and when they are admitting – they’re looking for kittens because that’s what they can most readily place.   Many will accept new cats only if they are current on vaccinations and already sterilized -- at your expense.


With all of these pitfalls, it’s hard for us to understand why anyone believes it’s best to let their cat have "one litter".  Spaying and neutering your pet cats should be a bottom line of adopting them – the sooner the better.  But – if you and your family want to experience the wonderment of kittens – do it responsibly.  Hook up with a shelter or rescue that has a family of kittens in need of a foster home to love them and care for them until they’re old enough to be adopted out.  It’s a 4-8 week commitment that instead of contributing to the problem of cat euthanasia can work to prevent it.    And – who knows – in the foster family there may even be a kitten or mom cat with your name on it.
Posted by Kitty Zimmer at 2:09 PM No comments:

Safe Sex for Cats Begins and Ends with Spay/Neuter 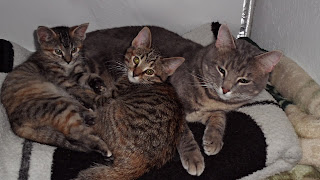 For most cats spay/neuter is a bottom line at adoption, but for those cats living in low-income households it’s often an unattainable luxury.  This is especially true when there’s more than one cat to fix causing the price to go up exponentially.  These caregivers want to act “responsibly” but they just don't have the front-end money to fix their cats -- even at low-cost nonprofit clinics.  And even if they can afford the lower rates, the longer drive to get to one of these clinics keeps it out of reach.

Yet far from being “irresponsible,” many of these low-income caregivers make a valiant effort to keep their cats “kitten-free” using other methods of birth control.    Here are a few of the most common:

Delay.  If their pets are kittens, they delay sterilization assuming they’ll save up the money by the time the cat is old enough to reproduce.  What escapes them is this can happen as early as 16 weeks, which is why shelters with staff veterinarians won’t release kittens until they’re fixed – sterilizing them when they’re as young as 8 weeks and including the cost in the adoption fee.  Ironically, the caregivers who can’t afford to fix their cats also can’t afford an adoption fee so they look elsewhere for their pets – and are not disappointed.  Finding a free cat or kitten is easy – they’re readily available from friends, relatives, and coworkers or simply roaming around outdoors -- typically the offspring of other cats whose caregivers also couldn't afford to get them fixed.

Isolation.  Many caregivers try to keep their female cats indoors while they’re in heat – which is every two weeks from early spring to late fall – but inevitably someone opens a door without looking and the cat is out in a flash – often pregnant  by the time she returns home.
Even those who succeed in keeping their female cats indoors often assume it’s okay to leave them with their male relatives – thinking that sons, fathers and brothers won’t impregnate their mother, daughters or sisters.  Not true.  Cats have no cultural mores to prohibit incestuous behaviors.    In the cat world any female cat is fair game for an intact tom.  Those that realize this may try keeping the male cats in one room and female cats in another, but of course this plan is foiled the moment someone forgets to close a door.  And – the stress it puts on the caregivers is considerable.

Selective Sterilization.    Still another common method of kitten control in multi-cat homes is to fix one sex and not the other. A major flaw with this is that it’s not always easy to tell the sex of a cat and by the time you realize “Harry” is really “Mary” she may already be pregnant.

And since it’s so much cheaper to neuter a male than spay a female, the males are often the ones fixed, so inevitably the female cats get pregnant anyway – sneaking outdoors when they have the opportunity.

Even when the money is there to spay only the females, the male cats will find other females to impregnate – or will start to spray and lose their homes for a problem that could be prevented by simply neutering them.
As valiant as these attempts at birth control are, they are all largely ineffective.  The only way to prevent kittens is sterilization – a simple surgical procedure that not only is 100% reliable, it also increases the probability a cat will keep his or her home long-term.   Once sterilized, cats are better housemates – no longer spraying, yowling or kittening.

In most of central and northern New Mexico, we provide free vouchers to low-income caregivers committed to the life care of their cats.   These vouchers pay the full cost to spay or neuter their cats at local veterinary clinics who subsidize the surgery costs.  If you know someone living in our service area that has intact cats, refer them to us.  They – and their cats – will be glad you did.
Posted by Kitty Zimmer at 1:34 PM No comments: