April Showers Bring May Flowers -- And Lots of Kittens Too 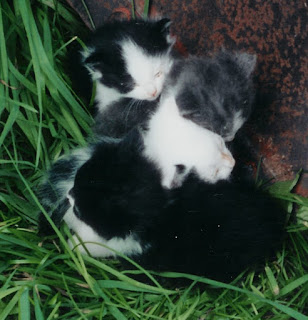 If you find newborn kittens nestled in with your daffodils and tulips this spring, don’t be surprised.  Unlike dogs who are largely commercially bred, cats mostly reproduce the old fashioned way – randomly.   And – with the majority of pet cats now sterilized as kittens -- most of this random breeding happens outdoors in feral cat colonies.


These colonies consist of lost and abandoned pet cats (who revert to feral behavior for survival) and their feral offspring.  They reside anywhere they have a stable food source and available dry shelter:  in rural fields with healthy rodent populations and thick vegetation --in commercial areas with dumpsters (that attract rodents) and protective landscaping -- and in residential yards with outdoor garbage cans or food left out for wildlife -- using log piles, sheds, undersides of mobile homes or similar structures for shelter.   You may have feral cats living very close to your home and not know it because they maintain such a low profile – active only between dusk and dawn when they’re least visible to people.  But their kittens -- who are not mobile -- are much easier to spot.
Feral kittens come in a rainbow of colors -- black, grey, orange, yellow, white, brown – and a kaleidoscope of patterns – solid, striped, swirled and patched – with fur ranging in length from short to medium to long.  Some even look like purebred cats – complete with color points and blue eyes.  They supply our shelters and rescues with a bumper crop of adoptable kittens each year – with the excess often put down for lack of homes or for contracting stress-induced illness.  And in spite of the number taken to shelters, more are passed person-to-person to friends, relatives and co-workers or through “free cat” ads in newspapers and on Craig’s List.  Still others go unnoticed and remain in their colonies permanently living as wildlife – often producing kittens themselves when they’re as young as 4 months old.
If a litter of kittens is born in your yard, leave them with their mother until they’re old enough to walk and eat on their own – usually about 4 weeks old.  Observe them --but don’t disturb them -- or the mother will move them.  Put kitten food out nearby at the same time each day for the mother to eat – leaving it out just long enough for a meal – and then pulling the remainder when she walks away. 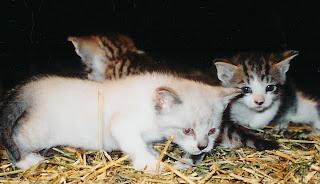 You can (and ideally should) separate the kittens from their mother at 4 weeks – otherwise she’ll train them to be as afraid of people as she is.  Wearing protective clothing or using a live trap, very carefully bring the litter indoors as a group to socialize – both to people and to their littermates -- or find someone who loves kittens to do it for you.  No special skills are needed other than a desire to spoil them with lots of human attention.    When you start handling them, wrap them in a towel for your protection.  Socialization occurs quickly in kittens this young – taking just a few weeks’ time – and it’s most effective when it’s done in private homes (not shelters) where they get exposed not only to people but to other pets and household noises like TVs, washers and doorbells.
While they’re being socialized, start networking to find good homes for them and -- whenever possible –fix them before giving them away --many vets sterilize kittens at 8 weeks of age provided they weigh at least two pounds.  Fixing the kittens not only makes them easier to place, but it also optimizes their chances of keeping their homes permanently.    Once they’re sexually mature, the persistent kittening, yowling and spraying often becomes more than even a committed caregiver can handle.  And – if they lack the money to fix the cats themselves -- they’ll face the tough choice of giving them to a shelter where they fear they’ll be put down –or abandoning them outdoors where they’ll have to fend for themselves – creating more feral cat colonies in the process. 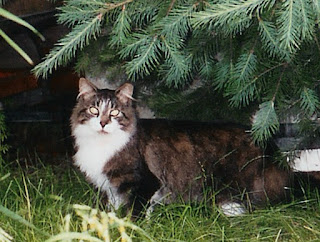 And – to prevent an encore litter later in the year –fix the mom cat too -- mom cats can get pregnant while they're still nursing.  When you separate the kittens, live trap the mother at feeding time and get her to a clinic for spaying.  Once she’s fixed, bring her back and release her outdoors.  If you can, continue feeding her meals --and if you find other cats coming to eat– get them fixed too.  If financially this is more than you can handle, check with cat rescues and vet clinics to see if there is funding – as there often is.
Posted by Kitty Zimmer at 10:25 AM No comments: