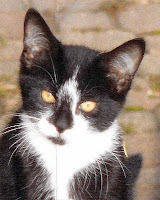 We've been funding free cat spay-neuter help for New Mexico’s low income families since 2010.  Working through area veterinary and spay/neuter clinics we've fixed 3,113 cats to date for 1,479 committed caregivers – with 1,524 surgeries just this last year.  We hope to see these numbers continue to grow in 2013.  To complement our free spay/neuter assistance, we've recently added a program to help these same caregivers pay for acute veterinary care in the event of a medical emergency.  Full details on both programs are on our web site.

While we initially serviced only Santa Fe County, we've gradually expanded into other regions at their request.  We now work with 17 clinics conveniently servicing Bernalillo (excluding Albuquerque), Catron, Rio Arriba, San Miguel, Santa Fe, Socorro, Taos and Torrance counties.  These local clinics are essential to reaching our target demographic who often find driving a long distance to a clinic as challenging as paying for the sterilization.  We thank the following clinics for accepting our vouchers as “payment in full” for a spay or neuter and a rabies vaccination and look forward to continuing to work with them during 2013:

The Foundation is dedicated to assisting low-income individuals and families provide long-term care for their cats by providing a veterinary care safety net.  Through this safety net we help keep their cats out of shelters and off the streets where – without this help – they all too often land.
Posted by Kitty Zimmer at 10:40 AM No comments: 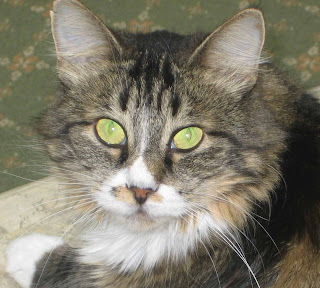 I learned about feral cats before I ever saw one.   In 2000 I attended a “No Kill Conference” in California and listened to a presentation by one of the founders of Alley Cat Allies on how to humanely care for them.    When she got to the part about how often people find them living in their yards I almost walked out of the room.  I was at the conference to help formulate cat programs for our foundation and I had never heard anyone in Michigan (where I was then living) mention that they had “wild” cats living in their yard.   Surely this phenomenon was limited to the east coast and wouldn’t play a part in our mission.
But– within a few months of starting our TLC (for The Love of Cats) programs -- Michigan feral cat colonies were popping up everywhere.  We responded in two ways:  (1) we formulated a free spay/neuter program for feral cats which we continued until we left Michigan in 2009 and (2) when we purchased a farm to sanctuary orphaned geriatric cats, we installed a show-and-tell feral  cat colony in its barn.   We wanted visitors to see feral cats up close and personal – and to understand how well they could live as outdoor-only cats.    Part of the ACA TNR perspective was that these cats were best sterilized and then left in their outdoor homes with a dedicated caregiver providing food, water and dry shelter.  For – if cats weren't socialized to people before they turned 8 weeks old – they would always be afraid of them – acting more like squirrels or rabbits than house cats.


Joyce was one of the feral cats in our colony.  And of the ones we ultimately moved indoors when we closed the farm, Joyce was one of the most feral.  Clearly she preferred cats to people and ACA was right about her – even after living as an indoor-only cat for 7 years – she never changed.   Rarely could we pet her and taking her to a vet for a routine exam would have required live-trapping so we never did.   Then last summer she started showing signs of chronic inflammatory bowel or perhaps lymphoma and we considered taking her in for evaluation.  At 12 years old, though, anesthesia without blood work was risky and there was no way a vet could examine her without it.  And – if we did find out what was wrong with her, medicating her would be impossible.

Her quality of life seemed pretty good and there were no signs of physical discomfort.  Then – last week we noticed she was easier to pet and that her coat was starting to look a little straggly.   Little did we know that she was about to leave us –she was still acting normal in most other ways.  New Year’s Eve she was in her regular sleep spot when we went to bed but sometime during the night she died without moving from it.  We don’t know what triggered her death, but we think it was heart failure.  Hopefully it was a peaceful ending. 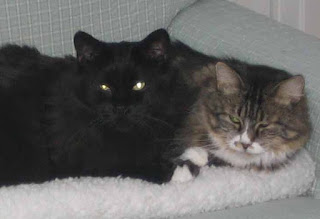 The house is a bit quieter now and we miss her.  But mainly our heart goes out to Larry – another feral cat we moved indoors with her that spent most of his time snuggling with her or walking to and from the food dish with her.    We used to think that Joyce relied on him for security – she was about a third of his size.  But over the years we learned it was the other way around – she was his security blanket.    He has other friends for sure – but he’ll never have another Joyce.  RIP.
Posted by Kitty Zimmer at 1:53 PM No comments: