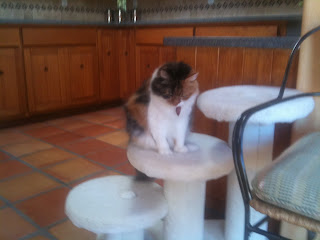 For a 17-year old cat, Missy is in pretty good shape. She takes a daily dose of Denamarin to support her liver function but appears healthy other than that with her weight is holding steady at a trim 7-1/2 pounds. The only indication we have that there may be some underlying geriatric health issues is that she’s spending a bit more time at the water dish than she did a few months ago. She has an annual exam coming up soon and new lab work may point to early kidney or thyroid disease – we’ll soon find out.

Yet in spite of her continued good health she has lost a step or two – literally. Here’s how we know. Missy is one of those stereotypic cats who’d prefer to be the “only cat” in the home – so having 11 cat-mates is not of her choosing and – unlike the other cats that eat, sleep and play together -- she mingles as little as possible. When we lived in Ann Arbor, Missy simulated “only cat” status by living in my upstairs office – an area off the beaten path of most of the other cats. In Santa Fe we have a one-story house so after a few days of scouting out a territory she selected a section of our kitchen counters – possibly the only “second story” area she could create. This is fine with us as the counter area isn’t one we use for food prep and anything that keeps Missy happy is good – both for her and the other cats that she hisses and growls at when they get too close for comfort.

Even last fall -- when Missy eked out the counter as her home -- her old bones were too stiff for her to jump directly from the floor to the counter so we kept a chair handy for her to use as a step. This worked fine for several months but more recently we’ve found her sometimes sleeping on the floor under the counter instead of on it -- and wondered why the change in her behavior. Then – while watching her jump onto the chair to get to the counter we discovered why. The hop onto the chair (and from the chair seat to the counter) is getting increasingly difficult for her. Instead of just taking a running leap onto the chair, she stands staring at it and wiggling her behind – and like a tennis player serving in the wind – she sometimes stops in mid-jump to start the process all over again. Apparently over the last several months Missy’s lost more agility –and/ or has reduced vision – and it’s limiting her mobility.

Not wanting her to lose the home of her choosing, we bought her a set of cat steps from Angelical Cats and placed it next to her chair. She’s now able to skip up her stairs without missing a beat – and can spend most of her day in her own private territory – fantasizing on being the only cat in the home. If only all geriatric health problems were this simple to fix! 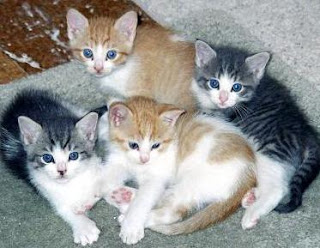 In its July/August 2010 issue, Animal People  reports that shelter kill rates are down 17% over the last 3 years despite a depressed economy that many thought would have the oppostive effect.

It was feared that the low economy would dramatically increase the number of owner turn-ins (from people who no longer could afford to have a pet) and decrease the number of new adoptions (with fewer people willing to take on the cost of a pet).   The result of this would be an increase in shelter kill rates.


Whatever caused the dip in shelter kill rates is not clear and is probably the result of many factors. Still, Animal People was able to identify one important factor:


“Wherever shelter killing has markedly dropped, about 95% of the progress can be attributed to low-cost and free high-volume cat and dog sterilization – which both reduces the numbers of homeless animals and, as free-to-good home puppies and kittens vanish, increases the opportunity for shelter animals to be adopted.”

It’s truly a closed-loop system –  by lowering the input (through pro-active spay/neuter) you also lower the output (shelter kill rates). It’s a very simple concept that seems finally to be taking hold!
Posted by Kitty Zimmer at 10:33 AM No comments: