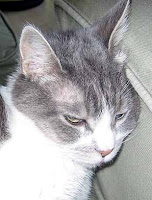 When we think of the chronic illnesses of older cats, kidney disease tops the list with a variety of cancers following close behind. One ramification of both end-stage kidney failure and some neurological-related cancers are brain seizures. And -- although they aren’t common -- they can and do happen – and when they do – they can be very disturbing to watch – especially the first time they happen. The topic of feline seizure disorders is well presented this month in a new TLC veterinary scholarship paper on our web site. Our work with the older cats has given us a personal perspective as well.


For our pet cat Gracie, seizures began when she was 12 years old in July 2002. We heard a banging noise and saw her paddling away in a puddle of urine on the floor. The episode lasted only seconds but it seemed like minutes and we had no clue as to what to do to help her. When the seizure ended we rushed her to the vet. They did a brief exam with blood work and sent us home. We learned an isolated seizure was not serious but if two or more seizures happen in a short time frame it’s a veterinary emergency. We should avoid handling her while she seizures (for safety reasons) but we should remove any potential hazards from her immediate area.

Gracie didn’t seizure again until the fall of 2003 when we heard another telltale banging noise. What we saw was Gracie lying on the floor paddling her 4 legs and writhing uncontrollably. These events became an all too common happening. Unfortunately she was often in precarious places when they occurred – once on top of a tall cat tree and once at the top of a flight of stairs. There were no obvious warning signs to alert us. Because of the frequency of her seizures, she was put on Phenobarbital and in July 2004 we had a MRI done. It showed a contrast-enhancing mass on the dorsal aspect of the brain that extended on either side of the midline. In addition it showed an extensive area of cerebral edema (fluid). Unlike the more common meningioma, her tumor was inoperable and so we continued her on Phenobarbital and later Keppra to control the seizures as best we could. And – to dry up the edema – we added prednisolone to her meds as well. Although Gracie’s actual seizures only lasted for a few seconds, their after effects (post-ictal period) commonly continued for one or more days. Immediately after a seizure she’d be ravenously hungry and walk around in a daze bumping into anything in her path. After a half hour or so she’d slow down a bit but her walking would be very unstable. We bought her a mesh cat “play pen” to keep her safe during the post-seizure phase and kept her as comfortable as we could until she went back to normal. Remarkably she lived for seven years coping reasonably well with her affliction until she died on February 17, 2009 from a seizure that would not end. She was 19 years old.

In addition to Gracie, we’ve had three other cats from our TLC Older Cat Program who also had seizures. Two (Sweetie and Tasha) had seizures in the end stage of kidney failure and Amber had infrequent seizures during the last two years of her life. She had many other health issues and we didn’t pursue the cause of her seizures but treated them with Keppra.

Seizures are a difficult behavior to encounter in your pet. The only good thing to be said for them is – based on accounts of people who have seizures – they aren’t painful and afterward the cat has no memory of ever having them!
Posted by Kitty Zimmer at 10:23 AM 12 comments:

Cat Spay of Santa Fe finished its first (May-December) year with a total of 459 cat sterilizations – and we’ve already got another 60 outstanding vouchers redeemable this month to give 2011 a jump start.
Our program is unique because it offers free and accessible spay/neuter help to cats that typically live below the spay/neuter radar – not because their caregivers don’t get the importance of sterilization -- but simply because they can’t afford it. They may be students, young parents, or unemployed, disabled or elderly adults living on fixed incomes – or they may be property owners feeding stray and feral cats that claim their yard as home -- where the sheer number of cats puts the cost of surgery out of reach regardless of income.
We appreciate the help we’re receiving from area vet clinics (shelter and private). For as important as it is to make spay/neuter free, it’s equally important to make it convenient. For many caregivers, the cost of gas is prohibitive and others are dependent on public transportation or friends and relatives to take them to a clinic – and they’ll hesitate to ask for help if it involves a major drive.
Our vouchers are now accepted in Santa Fe at Valley Veterinary, Sangre de Christo Animal Hospital, Gruda Animal Hospital and in Edgewood at Vista Larga Animal Hospital. In addition, the Santa Fe Animal Shelter and Humane Society accepts our vouchers at both their Spay/Neuter & Wellness Clinic and at their SpAN New Mexico Mobile Clinics – the latter accounted for almost half of our 2010 surgeries and enabled us to extend our services to outlying areas that would be difficult to cover without them.
Through the efforts of these clinics we're able to help caregivers fix -- and keep -- their cats.  Cats that could otherwise end up on their own outdoors or euthanized in shelters.  We look forward to 2011 as our first full year of activity and hope to see our spay/neuter numbers triple. Full details and program applications are available on our web site – but for many of our lower-income applicants who aren’t computer savvy – all it takes to apply is a five-minute phone call. We have no waiting list and mail vouchers as soon as the application is approved. Happy New Year to you and your cats!

BTW we're mapping our spay/neuters on our web site --totaled by zip code.  To see the scope of our service area just click here.  We'll update the map monthly throughout 2011.
Posted by Kitty Zimmer at 2:21 PM No comments: