It's time to retire the phrase "kitten season" 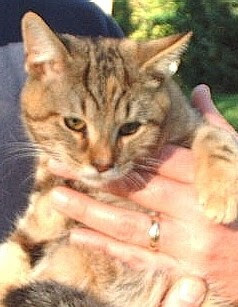 Here we are again -- at the onset of “kitten season” – the time of year where you see the biggest disconnect between cat lovers and cat welfare workers. To cat lovers, this is the best time of year to adopt a new cat – I mean kitten. Soon the shelters will be burgeoning with new litters and –and newspapers and Craig’s List will start running ads for “free kittens to good homes.” And – since the majority of kittens are born to outdoor cats – you may actually find the cat (I mean kitten) of your dreams living in your own backyard – or that of your neighbor’s. All you need to do is scoop her up before she turns 8 weeks old to effectively socialize her to the life of an indoor companion. Or – if you’re not looking for a new cat (I mean kitten) -- you can take the kittens you spot outdoors to a shelter or rescue where they’ll receive good care and find great lifelong homes.
But – if you’re a cat welfare worker you’ll have a different take on “kitten season”. First – it’s hard to think of kittens as a “season”. Cats over 4 months old are polyestrous long-day breeders with females (if they’re sexually active) going into heat every 3 weeks from March thru October – or year-round if they live indoors with artificial lighting. Second – of the kittens taken to shelters – only those that arrive at the shelter at the right age (around 8 weeks) and well-socialized (have had lots of prior human contact) find that loving permanent home – and that is if they are also healthy and the stress of being at a shelter doesn’t make them sick. (All shelters – no matter how fancy – are subject to airborne viruses that often are more than the immature kitten immune system can handle. When they get sick, they’re often euthanized rather than treated.)
So what happens to the kittens who don’t get adopted? They’re euthanized in shelters right along with the adult cats, dogs and puppies sharing their plight – healthy but homeless. According to the ASPCA, U.S. shelters euthanized approximately 3.7 million animals in 2008 – and there’s no reason to believe that number will drop much in 2011. 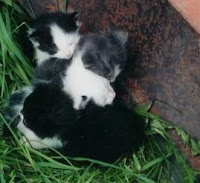 But despite these staggering euthanasia figures, we perpetuate the fantasy that kitten season is exciting. Probably because it's more palatable than thinking about the 10,137 shelter killings a day – 422 killings per hour, 24 hours a day, 365 days a year -- killings that could be prevented if instead of celebrating kittens we managed their numbers.   Isn't it time to retire the phrase "kitten season" -- a phrase that only pulls a pretty curtain over an incredibly ugly situation allowing us to close our eyes and ignore the root problem.  A problem with a known and easy solution -- free and accesible spay/neuter for all cats -- male, female, friendly or feral.
Posted by Kitty Zimmer at 10:35 AM No comments: