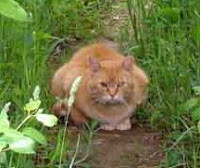 If you read the news regularly, you'd think it's open season on cats.  Frequently there'll be a news flash from the American Bird Conservancy or kindred organization alerting us to what overzealous bird hunters cats are --and more recently the federally-funded Smithsonian Conservation Biology Institute joined in.  It published a study in the journal Nature Communications reporting  that U.S. domestic cats kill up to 3.7 billion birds and as many as 20.7 billion mice, voles and other small mammals each year.

According to Merritt Clifton of Animal People – a nationally recognized keeper of animal statistics – their study is deeply flawed on many levels.  For one, it dramatically inflates the U.S. domestic cat population by at least 124 million cats.   And one of the scientists who conducted the study -- Nico Dauphine --  was arrested in 2011 for trying to poison neighborhood cats.  She was convicted and sentenced to do 120 hours of community service, spend a year on probation, and pay a fine of $100.  Yet -- in spite of this -- the Smithsonian kept her on staff and allowed her to continue doing “research” on cats.    Her sentence is a sham when compared to the calls to kill outdoor cats for threatening birds -- as a human she should have known better.

Surely no one likes to think about animals killing animals but it happens -- and cats are by no means the only animal that does it.  Most species do -- including dogs and humans.   But only cat predation  makes the evening news. 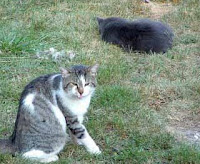 Since moving to New Mexico we’re constantly reminded about the risk dogs, coyotes and – yes -- large birds -- pose to outdoor cats and kittens.  Frequently a spay/neuter applicant will comment they keep their cats indoors to protect them from owls.  Just last week a woman called and said she wanted to get her cat fixed and when we asked how she got the cat, she said her dog had taken a kitten from a bird who had snatched it and then she saved the kitten from her dog!
Unbridled attacks on cat behavior veiled as scientific “research” need to be stopped.  And the media – who pick the studies up as chapter and verse and report them as “news” need to recognize them for what they are -- propaganda from organizations with anti-cat agendas.

And as a culture, we must remember that cats are part of our ecosystem and as such, they should have the same rights as any other species.  Several years ago the San Francisco SPCA published a “Cats Bill of Rights” and it’s worth revisiting now:    These are the basic rights all cats should have:

It goes without saying that many individual cats already enjoy these rights – yet as a group they continue to have these rights violated.  All too often a different standard applied to their behaviors than to other species.  How sad!
Posted by Kitty Zimmer at 1:17 PM No comments: 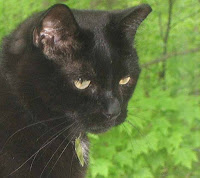 2013 is a sad year for TLC.  Robin just joined Joyce (who died on New Year’s) on the Rainbow Bridge.    Like Joyce’s death – Robin’s was sudden.  A few weeks ago he became very bloated and was diagnosed with end-stage cancer.   But -- up until a few days before his death there were no behavioral signs of illness and he passed his 6-month physical last fall with flying colors.  Cats are masters at hiding illness until it’s too late to treat.

Robin – like Joyce -- came from the show-and-tell feral cat colony we maintained from 2001-2005 at our Older Cat Sanctuary in Saline, Michigan.  While the older companion cats lived cage-free in the farmhouse, the feral colony occupied the barn.  Then, when we refocused our efforts exclusively on free and local cat spay/neuter, we merged both groups together in a closed-admission indoor shelter to live out their lives.  With these two gone only 7 remain – three of which (Onyx age 18, and Missy and Simon age 20) are in hospice. 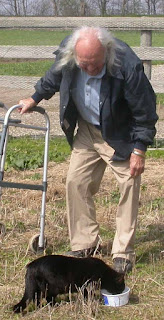 Although Robin was given to us as a feral cat – he was anything but.   Unlike Joyce who stayed distant from people even after living as an indoor-only cat for 8 years – Robin was a ringer.  True – prior to coming to TLC he lived outdoors on his own – and when he first arrived he was very skittish around us – but once he settled in, the socialized cat re-emerged – enjoying being petted and groomed and living with people.  He most definitely was someone’s lost or abandoned pet cat.   The elderly man who gave us Robin recognized his "pet potential" and visited him every day for the first 3 years we had him -- then Maury's health deteriorated and he had to discontinue his visits -- having his wife Edna call weekly to make sure Robin was doing well.

As often happens when cats are left to fend for themselves outdoors, they take on the behaviors of a feral cat – fearful of people -- hiding from them during the daytime and waiting for the cloak of night to come out for food.    Then – when they’re given a second chance to live with people– they calm down and the socialized cat re-emerges.    If it weren't for Robin’s ear-tip (done when he was neutered to identify him as a sterilized feral) you’d never have been the wiser.

Lucky for Robin when he was rescued he ended up in our cat colony – if he had been turned in to a conventional animal control shelter he would have been categorized as a feral cat and euthanized on arrival as unadoptable.  Shelter intake decisions are made quickly – and the “feral” Robin would have hidden the “socialized” Robin from their view.    That’s one of the dangers of categorizing cats – they’re not that simple and first impressions are often misleading or downright wrong.    And – in Robin’s case – an arbitrary decision would have ended his life 12 years too soon.
Posted by Kitty Zimmer at 10:36 AM No comments: