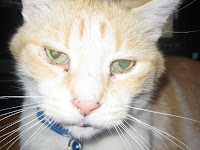 For a 17-year old, Onyx has stayed pretty healthy – at least up until this year.


In February, Onyx started breathing rapid shallow breaths averaging about twice the normal rate. His blood work showed early kidney disease – which is to be expected for cats in his age group – and a slightly high thyroid value– also not atypical. We took chest x-rays and found a few small “donuts” in his lung area and so we tried treating the breathing problem as asthma – but he didn’t respond to the medications.

Then, during a recheck a few weeks ago, we noticed blood spots in his eyes and measured his blood pressure – sure enough it was high at 190 -- and so we started him on medicine to lower it  -- which it did – to 145 – but the spots are still in his eyes and his pupils stay large all the time. If this was caused by hypertension, lowering his blood pressure should have helped but maybe it’ll take more time. Fortunately his vision seems okay – as we've learned last year with other TLC cats – uncontrolled hypertension can lead to blindness.

Now we're trying thyroid medications and they may help -- even though he’s only slightly hyperthyroid. If not, we’re still left with a few other causes – none of them good. Symptoms like Onyx has could be caused by cancer, dry FIP, extreme fungal infection or heartworm. Of these, heartworm could be the most likely. Why? Because last summer he tested positive for heartworm exposure on a routine blood test.

It takes awhile for heartworms to grow so the timing is right. We tested for adult heartworms a few weeks ago and it was negative but the test only works when there are at least 2 female heartworms –  one female or males don’t show up. Even if it is heartworm, there’s little we can do to treat it.  The poison that kills the heartworms is so strong it can also kill cats so it's not safe. And, since Onyx doesn’t seem to be in distress, he may be okay – we just don’t know. We worry about his symptoms and hope they don’t get any worse. Having a known diagnosis is always preferable – but as we’re seeing with Onyx – it’s not always possible.
Posted by Kitty Zimmer at 2:18 PM