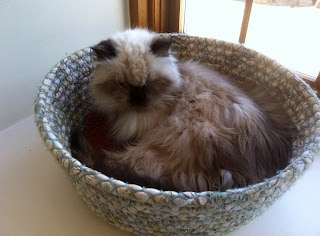 Simon’s quality of life started to slide late last summer.  Always idiosyncratic, he suddenly became more so – instead of sleeping on the seat of a chair he’d sleep on the back, instead of standing next to his food he’d get on top of its tray to eat, and he didn’t recognize when he had to use a litter box so would simply go wherever he happened to be when nature called.  The vet suspected he had had a mini stroke – or at the age of 19 – had simply become very senile.

At any rate he was clearly a special needs cat and to accommodate his bizarre behaviors we set up a large floor cage lined with washable piddle pads for him to live in.  Since he spent almost all of his time sleeping, this worked very well.  We confined him overnight and left the cage door open during the daytime so when he wasn't sleeping and wanted exercise he could come out. 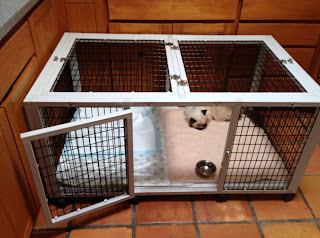 But, as sad as his new behaviors were, they were not life-threatening.  And – as with many geriatric cats – it would be kidney failure that would ultimately cause his death.    By last Wednesday he stopped eating and on Friday with much sadness we decided it was time to let him go.

Little is known of the first half of Simon’s life – TLC picked him up from the local animal control shelter in 2003.   A cat Samaritan had turned him in after finding him wandering the streets of Ann Arbor, Michigan.  The shelter estimated his age at 10 and so he was too old for them to adopt out.  They also feared he was blind because his eyes were totally milky with no visible pupils.    Turned out the cause of their milkiness was a flare up of the herpes virus – probably a condition he was born with.  It literally took a few years to stop the periodic outbreaks and he required a series of daily eye drops for the rest of his life.

Simon clearly preferred people to other cats – loving to sit on laps and talking constantly.  He pretty much ignored other cats as they ignored him.    We often thought he was more human than feline – and had the appetite to prove it.  Where most of our cats ignore human food Simon sought it out.  By last January he had morphed from cat food to baby food which wasn't great for his kidneys but it was all he would eat.

Simon was a remarkable little guy – and one we will not soon forget.  RIP.

Posted by Kitty Zimmer at 9:34 AM No comments: