Is It Really Raining Cats and Dogs? 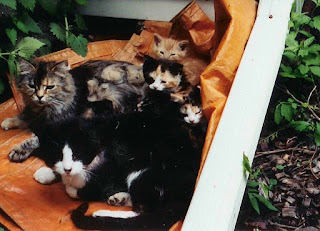 If you believe the statistics published by many animal organizations, yes.  For example, PETA’s web site states that in “…seven years one female cat and her offspring can produce an incredible 370,000 kittens” And …”Just one unaltered female dog and her offspring can produce 67,000 puppies in only six years”.     Although these numbers may add up on paper, Mother Nature sees to it that they never play out in real life – for if they were even close to being accurate, our streets would be so full of cats and dogs that we wouldn't be able to walk down the sidewalk without tripping over them.  And that simply isn't the case.


No one really knows how many cats and dogs there are – but the pet owner marketing surveys published by APPA (American Pet Product Producers Association) may shed some light.  They estimate there are about 164 million cats and 78 million dogs living in American homes.  Annual adoptions into this population include about 12 million cats and 11 million dogs.  Un-owned cats living outdoors in feral cat colonies add to the total cat population –but again how many there are is unknown.  Estimates run as high as one feral cat for every owned cat.  Yet as we've seen through our spay/neuter program – the line is blurry between the two groups and many “yard cats” may be double-counted.

Of the 12 million cats adopted out each year, only 500,000 are purebred cats purchased from breeders, and 2.5 million come from animal shelter adoptions.  The overwhelming majority –9 million-- are cats that are literally found outdoors (feral, lost or abandoned) or born to someone’s pet cat – and then kept or given to someone else through a free cat ad or networking person-to-person with friends, relatives and coworkers.

APPA doesn't distinguish, but we assume the majority of adoptions are kittens and puppies – with most of the balance being young adults – often abandoned or relinquished from homes that can’t afford to fix them.   For – once pets become sexually mature, they become increasingly challenging to care for – even for the most loving guardians.   Only 12% (or 20 million) of owned cats are left intact – not because their guardians don’t understand the importance of fixing them, but simply because they lack the front-end money to do so.  Scare tactic population statistics aren't needed to drive home this point – all you have to do is live with one to understand.
So why does PETA and many other otherwise responsible animal organizations perpetuate these grossly misleading statistics?  Perhaps they think that this is the best way to show the importance of spaying and neutering cats or that it’s the best way to justify the use of healthy cat euthanasia to manage shelter occupancy rates – for according to the HSUS, 2.5 million cats and kittens are put down prematurely in shelters annually – rough half of their total admissions.    Whatever their reason, the result is a distorted picture of the number of cats – one that may be more hurtful to them than helpful.
Posted by Kitty Zimmer at 1:58 PM No comments: